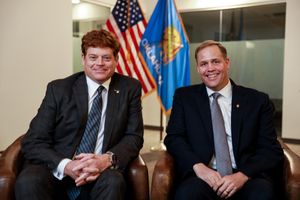 “Jim’s wealth of knowledge in the space, military, aerospace and engineering sectors will be invaluable to Acorn and its portfolio companies as we continue our mission to invest in operating companies that strive to enhance global mobility, protect national interests and develop next-generation intelligence capability,” said Rick Nagel, Managing Partner of Acorn. “He will play a key role in our efforts to deploy capital from our newest investment vehicle, Acorn Aerospace & Defense Fund V.”

“Administrator Bridenstine will be returning to Tulsa, Oklahoma, as we expand our footprint in one of the top seven aerospace regional super-clusters in the world,” Nagel said.

Bridenstine resigned his position as the 13th Administrator of the National Aeronautics and Space Administration (NASA) effective Jan. 20, 2021.

“I am excited about joining Acorn Growth Companies and starting a new chapter of service to the United States, while advancing our aerospace and defense industries,” said Bridenstine. “I’m looking forward to re-entering the private sector and working with an established market leader such as Acorn.”

“Jim’s skill set spans all aspects of Acorn’s focus. With his knowledge and first-hand experience, Jim will play a key role in enhancing the strategic and business development efforts of Acorn and our portfolio companies by helping qualify opportunities in future investments,” Nagel said.

“Innovation is found in small and mid-market companies,” said Bridenstine. “I’m excited to join this firm and work with disruptors that provide needed innovation to the aerospace and defense industries,” Bridenstine said.

Under Bridenstine’s leadership at NASA, America returned to once again launching American astronauts on American rockets from American soil, something not done since the end of the Space Shuttle program in 2011. He did this while sustaining the commercial resupply of the International Space Station (ISS) and expanding ISS utilization.

Bridenstine launched NASA’s new human lunar exploration initiative named Artemis, which seeks to land the first woman and the next man on the Moon for the first time since 1972. This program utilizes the most powerful rocket ever built, the Space Launch System, as well as the Orion Crew Capsule, the Human Lander System and the Gateway. The Gateway is a lunar orbiting space station that will give American astronauts more access to the surface of the Moon than ever before.

Under Bridenstine, NASA also established the Commercial Lunar Payload Services Program to partner with private enterprise in landing rovers on the lunar surface. The rovers will contain tools and science experiments in preparation for the arrival of American astronauts. Bridenstine focused Artemis on proving NASA’s technology and perfecting NASA’s capabilities to live and work on another world in preparation for a crewed mission to Mars.

The agency’s dynamic science portfolio under Bridenstine included the Mars Perseverance Rover, scheduled to land on Mars in February 2021. He also focused on enhancing the nation’s fleet of Earth-observing satellites and making final preparations of the James Webb Space Telescope.

Prior to his time at NASA, Bridenstine was elected in 2012 to represent Oklahoma’s First Congressional District in the U.S. House of Representatives, where he served on the Armed Services Committee and the Science, Space and Technology Committee. His career in federal service began in 1998 as a pilot in the U.S. Navy. He flew E-2C Hawkeyes off various aircraft carriers gathering 1900 flight hours, 333 aircraft carrier landings and dozens of combat missions in Iraq and Afghanistan. He later transitioned to the F-18 Hornet and flew at the Naval Strike and Air Warfare Center, the parent command to TOPGUN.

After transitioning from active duty to the U.S. Navy Reserve, Bridenstine returned home to Tulsa to serve as the Executive Director of the Tulsa Air and Space Museum & Planetarium.

Bridenstine completed a triple major at Rice University and earned his MBA at Cornell University.

Acorn Growth Companies is a middle market private equity firm focused exclusively on Aerospace, Defense and Intelligence. Acorn invests solely in operating companies that strive to enhance global mobility and protect national interests. Acorn has a formidable reputation in the industry and is recognized for its deep understanding of the Aerospace, Defense and Intelligence markets, with proprietary access to the best companies within these sectors. With operational expertise and its ability to lead and manage investments through variable economic and industry cycles, Acorn works in tandem with management to build its portfolio companies into significant market leaders. More information can be found at AcornGrowthCompanies.com